In the early 20th century when the Craftsman style was at its peak, the bulk of Craftsman homes were sold to average middle class families.  They were well built, affordable and worked both in rural areas and small inner city lots and you could find them all over the country.

When it comes to listing iconic Craftsman style homes, you could easily list dozens but for the sake of expedience here are the top 5.  You may not agree, there may be some you love that didn’t make the list but here they are. 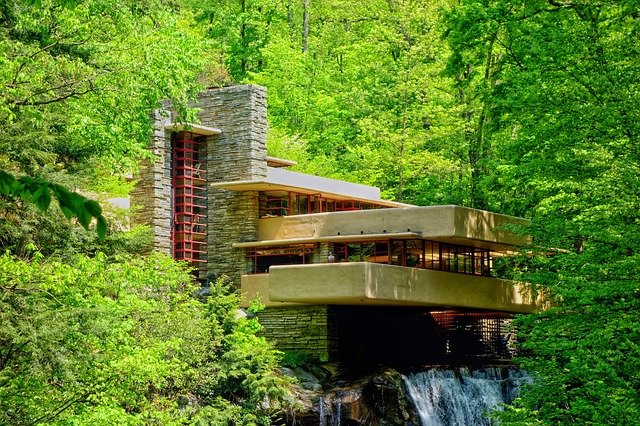 One of the masterpieces of Frank Lloyd Wright, Fallingwater is nestled in southwestern Pennsylvania and over looking a waterfall.  Wright always referred to his style as “organic”- in harmony with nature, Fallingwater displays this superbly.

When Wright first saw the sound he appreciated the natural elements, the forest, the waterfall and the rock ledges surrounding him.  Considered one of his greatest pieces in a large body of work Fallingwater began a new chapter in architecture.  It captured perfectly the philosophy that drove the Craftsman movement and remains a showpiece today. 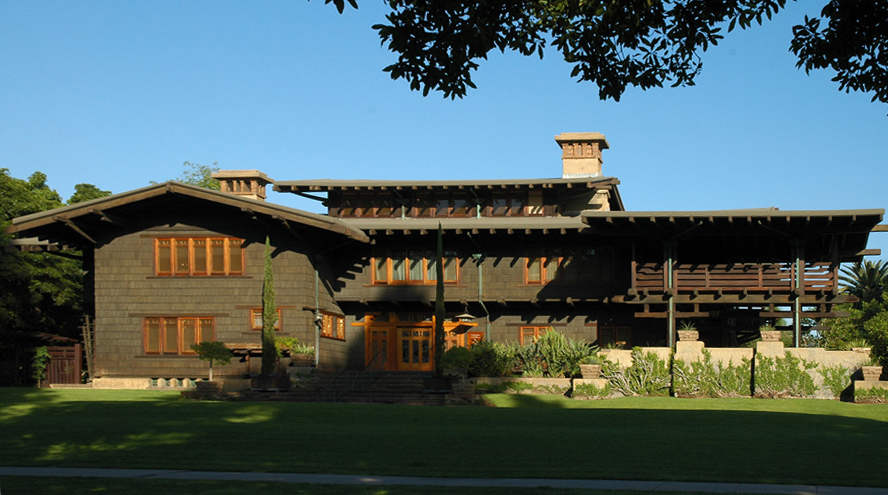 Gamble House is the creation of Charles Sumner Greene and Henry Mather Greene from the architectural firm Greene & Greene in Pasadena California.  Originally built for David Gamble of Proctor & Gamble, it is now a California and National Historic Landmark.

Based on the bungalow style of house the Greene brothers were renowned for, this home was built using a variety of tropical woods, long lines and three sleeping porches.  Built in 1908 Gamble House was the Greene brothers at the pinnacle of their creativity.  Gamble House is often hailed as the finest example of Arts & Crafts architecture anywhere in the world.  Now that it is a historical landmark you can tour through Gamble House and see for yourself just how exquisite it really is. 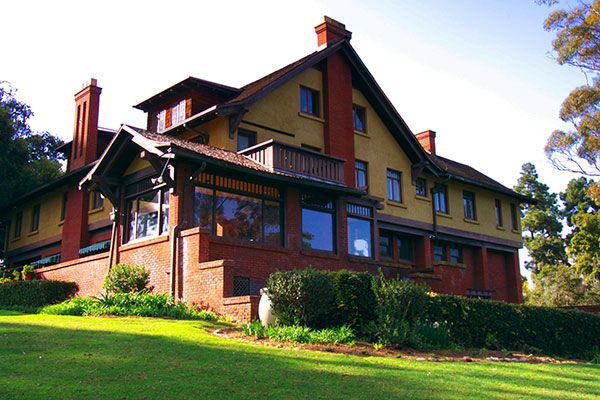 Built in 1905 in Balboa Park, San Diego the Marston House was designed and built by William Sterling Hebbard and Irving Gill for George W, Marston and his wife.  The home sits on five acres of rolling lawns and gardens.  The Marston family gifted the house to the city of San Diego and in 1987 it became a museum.

The home itself was beautifully furnished in the Arts & Crafts style with pieces from Gustav Stickley, L & JG Stickley, Charles Limbert among other famous furniture makers.  If you take a tour of the home many of the original furnishings are still on display.  The Marston House is a beautiful example of Craftsman design both inside and out.

Craftsman Farms is the showpiece of Gustav Stickley, built in 1911 it sits as one of the most significant landmarks of the American Arts & Crafts movement.  Considering how important Stickley was to the movement this comes as no surprise.  Today Craftsman Farms is the home of the Stickley Museum and is a National Historic Landmark.

Stickley was one of the most well known figures in the Arts & Crafts movement, and filled many roles, furniture maker, designer, architect, magazine publisher and social critic.  Stickley initially acquired the property to open a school for boys, the log farm house is built with chestnut logs and stone sourced from the property itself.  The large main house is T-shaped with a huge kitchen and the living room and dining area reaching 50 feet. The property exemplifies Stickley’s philosphies, take a tour and see for yourself. 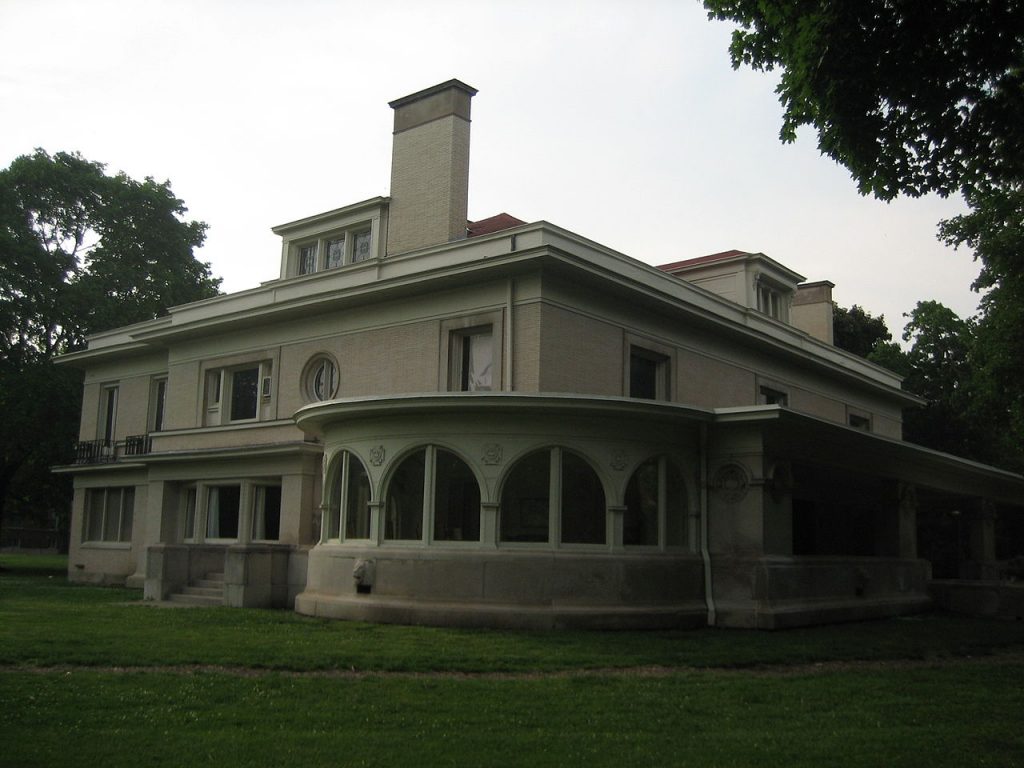 Built in 1897 Pleasant Home was designed by architect George W. Maher.  Maher was part of the Prairie School group of architects and Pleasant Home is an important example of Prairie style.  Like all the other houses on this list, Pleasant Home is also on the National Register of Historic Places.

Pleasant Home was originally built for John Farson, but it was named Pleasant Home because of its location at the corners of Pleasant Street and Home Avenue in Oak Park, a suburb of Chicago.  Maher as part of the Prairie School worked with Frank Lloyd Wright and shared the philosophy of blending architecture to the surrounding environment.

There you have it, the list of 5 of the most iconic Craftsman style homes.  Most are open to the public for tours so you can see the craftsmanship and detailing that went into construction in the Craftsman era.

Craftsman architecture and the whole Arts & Crafts movement in the late 19th century was in part a return to simpler design after the heavily ornamented Victorian homes.  It was also a reaction to the industrial revolution and the beginning of mass produced goods.  The pioneers of the movement William Morris, Gustav Stickley and even Frank Lloyd Wright all wanted architectural design that illustrated craftsmanship and worked with the environment.  Craftsman homes were intended to convey sturdiness with their square and simple styles.

So what are the features of a Craftsman home?

How do you look at a home and know that it’s a Craftsman?  Let’s explore some of the features that define the Craftsman movement and architectural design.

Low Pitched Gabled Roofs – The rooflines are meant to blend with the surrounding landscapes, typically with a wide and unenclosed overhanging eaves with decorative supports.  Low gabled roofs were more common in California Craftsman home, the bungalows and foursquares in the Midwest had steeper roofs because of the climate.

Front Porch – Front porches are a staple of Craftsman homes, even if it just simply covers the entryway to the home.  Most porches are the full width of the house, while some are a partial width.  The porch is either sheltered under the main roof or a small separate extended partial roof. Porches extend the livable spaces of smaller bungalows and foursquares, they also act as a transitional space between the inside and outside.

Tapered Columns – Tapered columns are one of the most distinctive characteristics of a Craftsman.  They will have some variation in the detailing; supporting the porch roof they usually rest on brick or stone piers that go right to the ground.  Installing the distinctive porch supports is a great way to add the Craftsman style to your existing home.

Multipaned Windows – This style like others, came from the Prairie school in the Midwest the most common type of multipaned windows are either 6 panes over 1 or 4 panes over 1 double hung windows.  Craftsman homes tend to have many windows allowing in lots of natural light, often these windows are grouped together with a wide trim.  These windows work wonderfully on homes set on hills with great views, the bottom pane has no obstruction.

Distinctive Doors – Craftsman homes have distinctive doors with glass panes in top.  The window in the doors is a smaller version of the multipaned windows, with a thick piece of trim.  Swapping out your existing door for a Craftsman style door is another way to add Craftsman features to your home.

Earth Tone Paint Colors – Craftsman homes are meant to blend and be part of the surrounding environment.  Look to nature when choosing a color for your home, use one or two contrasting colors to highlight features for trim.  Using a richer color on trim will highlight the architectural features that make your home a Craftsman.

Single Dormers – When dormers are present, they are fairly common in the Foursquare, there is usually only one wide one as opposed to the pairs of dormers you will find on a Cape Cod style home.  The single dormers are often big enough for multiple windows and can create usable space in attics by adding some additional square footage.  In keeping with Craftsman style they also allow in plenty of natural light.

Stone Detail – There is usually a variety of materials that make up a Craftsman home, siding is often wooden clapboard but the architectural features like porch piers use brick, stone and concrete.

Exposed Rafter Tails and Beams – This reflects the Arts & Crafts influence it sought to show the handcrafting that went into the construction of these styles of homes, and it is another distinct characteristic of a Craftsman.  This is also where you can use some richer color to make the feature stand out. You can add these features to any deep roof to add that Craftsman style to your home.

Knee Braces – The are used instead of the rafter tails and they are often decorative underneath any deep roof.