Origins of the Prairie Style Home

In 1893, Frank Lloyd Wright began his architectural practice just outside of Chicago in Oak Park, from here he would go on to change the face of American architecture.  Inspired by the geography and landscape of the Midwest he would take that inspiration and pioneer a new approach to architecture.  The Craftsman Prairie Style Home was the first distinctly American Architectural style.  The term “Prairie Style” came from an article by Wright that was published in 1901 in Ladies Home Journal titled “A Home in a Prairie Town.”  The first home built by Wright that embodied the Craftsman Prairie style was the W.W. Willits house in Highland Park in 1902.  You can see all the features of the home in the following video.

Frank Lloyd Wright was disillusioned by the European influences on American domestic architecture.  Housing styles mirrored homes from French Empire, Italianate and of course the Victorian era.  Wright found the layouts  of the Victorian style houses to be boxy and confining and craved a cleaner, simpler style.  Wright also sought to create something that was American and not influenced by European style.

The New School of the Middle West

In the late 19th century Chicago was the place to be for young architects, the Great Chicago Fire and the The World’s Columbian Exposition led to a flurry of construction, and many of the architects were disappointed in the Greek and Roman influences in the buildings constructed for the fair.  During these early years in Chicago Wright worked with a group of architects this group would later become known as “The New School of the Middle West”.  They included George Washington Maher, Vernon Watson, William Gray Purcell, along with Marion Mahony, Walter Burley Griffin, William Drummond and Francis Byrne who would become associates of Wright.

In the late 1880s in England the Arts and Crafts Movement was taking hold in England, led by John Ruskin and William Morris, they too rejected the Victorian and European styles of the day.  The movement disliked the mass production of the Industrial age, they created inferior goods and workers were treated badly. Instead they favored original designs and craftsmanship.  The Prairie School was developing at the same time and shared the ideals and design styles of the movement.  Using natural materials found local to the area with clean lines and open spaces in the interior.

Defining characteristics of the Prairie School include horizontal lines that are meant to blend with surrounding landscapes, built around central chimney the interior consisted of open spaces instead of clearly defined rooms.  Prairie homes also featured low pitched or flat roofs with overhanging eaves, they were often two floors with a central staircase.  The first prairie homes were constructed with plaster with wood trim, or horizontal board and batten, eventually they were built with concrete block. 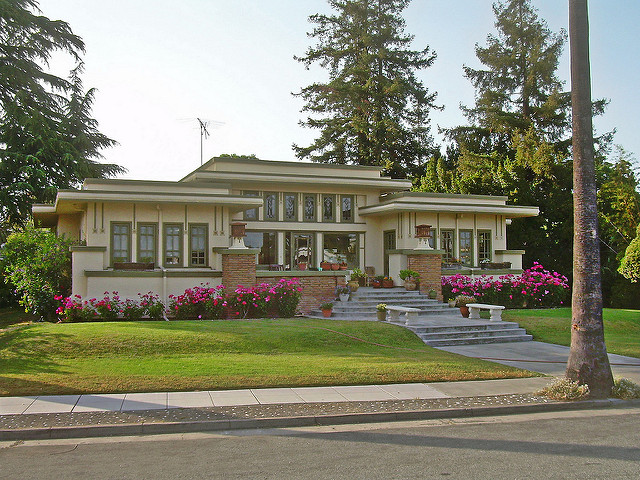 Since Prairie Homes were largely defined by their horizontal lines, they could take on any shape and weren’t limited to a single story like the Craftsman Bungalow.  You can find Prairie homes that are  L-shaped, T-shaped and square.  Square shaped Prairie homes eventually evolved into the Craftsman Foursquare, often referred to as the “Prairie Box”.

In 1929 when the stock market crash millions of people around the world were devastated, but the hopes and dreams for middle class Americans were crushed.  Many people went from relative affluence to struggling day to day for survival.  Everything had changed and that included the housing market.  It was during this time that Frank Lloyd Wright created the idea of affordable housing for the average middle class family.  He wanted to create affordable housing that was still practical and functional.  The Usonian house was born, it still work with Wright’s ideals of organic architecture.

The name Usonian came from one of his trips to Europe, there was talk floating around of calling the United States, USONA to distinguish it from the Union of South Africa which had just been formed.  Wright took the term as his own instead and used the name for the new architecture he had just designed.  Wright wanted the Usonian homes to be built to suit the homeowners making each one unique, but still in line with what he envisioned organic architecture to be.  He also encouraged the homeowners involvement in the building, so they would have a deep connection to the house.

There were very few Usonian homes built, only about 60 or so and the Jacobs House built in 1936 was the first.  These homes were usually smaller single story houses that were L-shaped, and typical of his idea of organic architecture, were built with locally sourced materials. The kitchen and living room areas comprised the larger part of the house with bedrooms and bathrooms in the back. The bedrooms were small and featured built in storage.  The main areas often included built furniture.  Other common features were horizontal lines, flat roofs with overhangs and the use of local and natural material all of which is typical of Wright’s style. 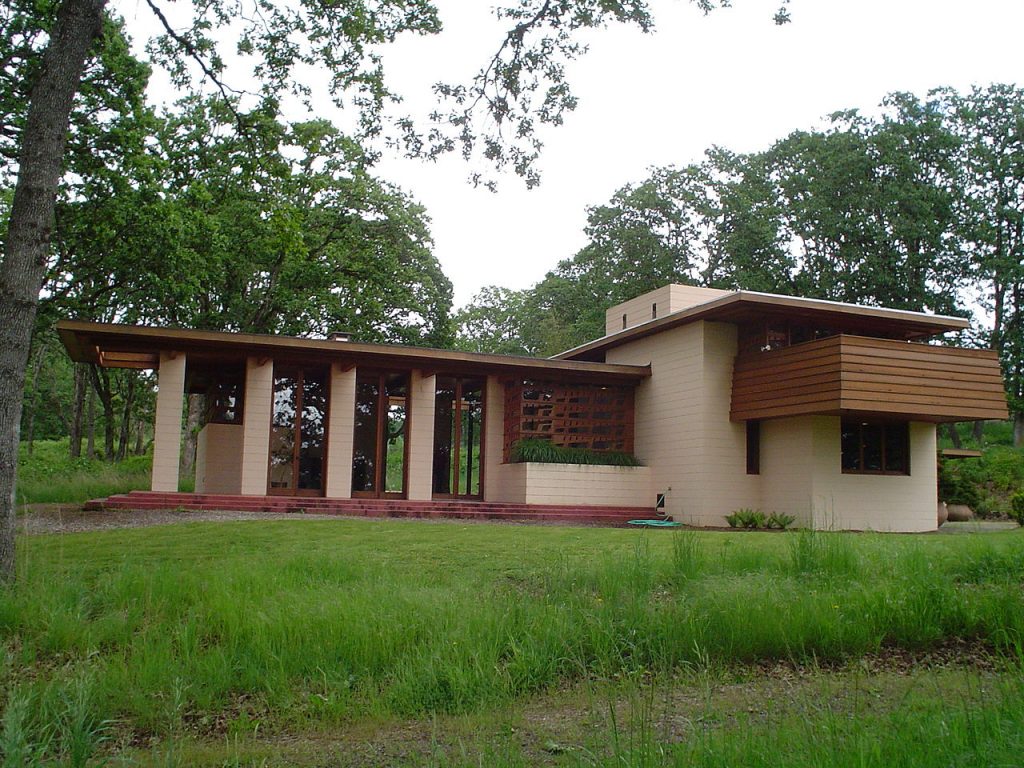 For most students of architectural history Frank Lloyd Wright pioneered and personified the Craftman style homes in the United States.  His own visions of what architecture melded seamlessly with the arts and crafts movement that came from England.  Wright designed and built thousands of homes across America and his influence is still a huge part of modern architecture.