Drive down a residential street in almost any neighborhood in America and you’re bound to see a Craftsman Ranch style home. During their heyday they were to go-to design in new construction, often associated with tract housing this simple design dominated the market. The Ranch or Rambler embodies many of the elements of a Craftsman bungalow, purists would call it the next generation of Craftsman as opposed to a true Craftsman style home.

History of the Ranch Style

The original Ranch style homes first made an appearance in the 1920’s in the American southwest.  They were a combination of modern architecture and Spanish colonial design from the 17th-19th century that is found all over the southwest.

Early Craftsman Ranch style homes were simple one story homes built with adobe or bricks, material that was found nearby.  Roofs were low with overhanging eaves to help the sun and heat out of the home.  Inside was a simple open floor plan where one room flowed into the next.  These original Ranch homes from the 20’s also featured wide front porches and a u-shaped design with an inner courtyard.

Although appearing in the 20’s the Ranch really wouldn’t gain popularity until after WWII.  The end of the war began the biggest housing boom ever seen, new housing developments and suburbs were being built all over the country.  The Craftsman Ranch style was so popular that they were 9 out of every 10 houses being built.  One of the architects responsible for the popularity of the Ranch style was Cliff May considered one of the pioneers of the style he built houses throughout California to suit the climate. 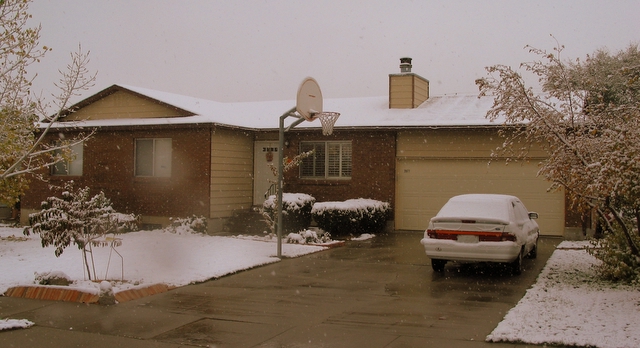 After the war the American housing market had changed with most homes now having indoor plumbing and electricity.  The demands of the homeowner had changed in this economy too.  Craftsmanship took a back seat to an attached garage and a dishwasher, smooth rich hardwood floors were replaced with carpets.  The housing demand meant that houses had to be built quickly and cost effectively, many of the original features of the Craftsman home were replaced by simpler design.

The Craftsman Ranch style is easily recognizable by the following features:

Like other Craftsman style homes Ranch homes features an open floor plan throughout the home.  Large rooms like the living room and dining room flowed into one another, sometimes with a half wall separating the two spaces.  Since many early Ranch homes were L or U-shaped the arrangement of the rooms could vary.  Most Ranches were between 1,000-1,500 square feet so there was plenty of room.

The Ranch homes you found in California were built atop concrete slabs, while Midwest style Ranches had a full basement.  Some basements were finished to create extra living space like a family room.  Interiors could have some of the same features of Craftsman bungalows or Foursquares such as built in cabinetry but there were no hard and fast rules.

Much like the Craftsman Bungalow the Craftsman Ranch style were built for a burgeoning middle class and they were affordable for American home owners.  Ranches today are still one of the most affordable house styles, enjoying a resurgence in popularity among first time buyers.